I’ve waited two months to get these house numbers.  And I have to say, I’m disappointed in the end result.  Not because of the product, but because of my installation.  I took so much care and preparation and still, it didn’t work out.

When I first got the numbers, I installed their posts and used a piece of cardboard to make a drilling hole template.  I pushed the numbers’ posts through the cardboard to identify the hole placement. 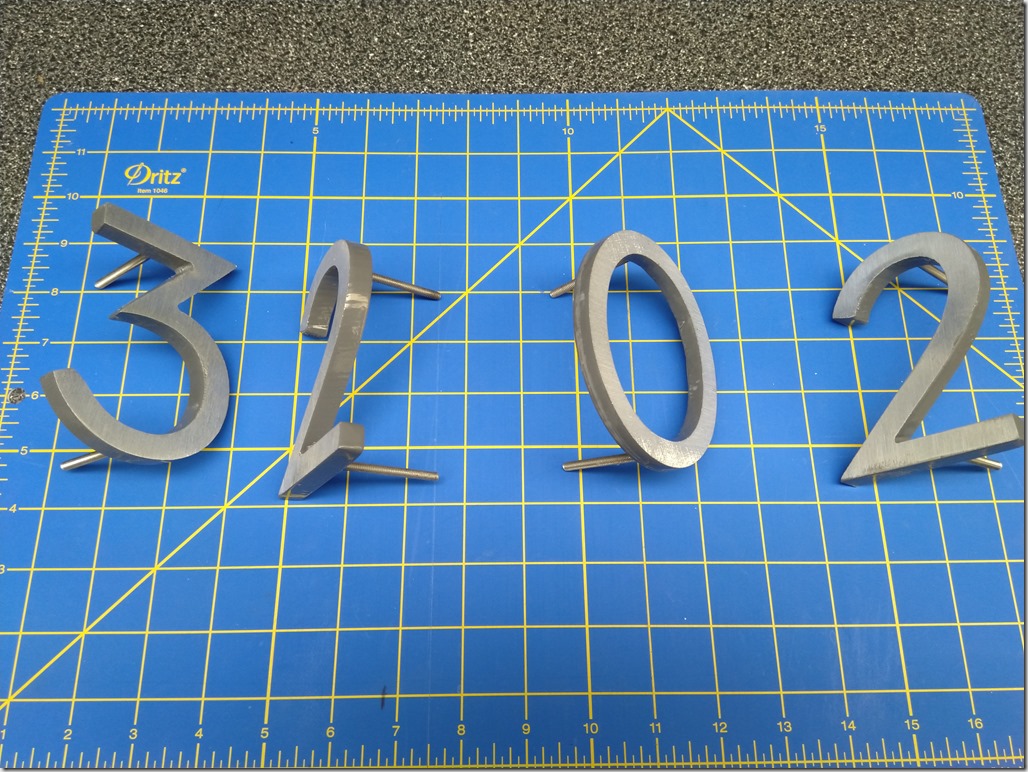 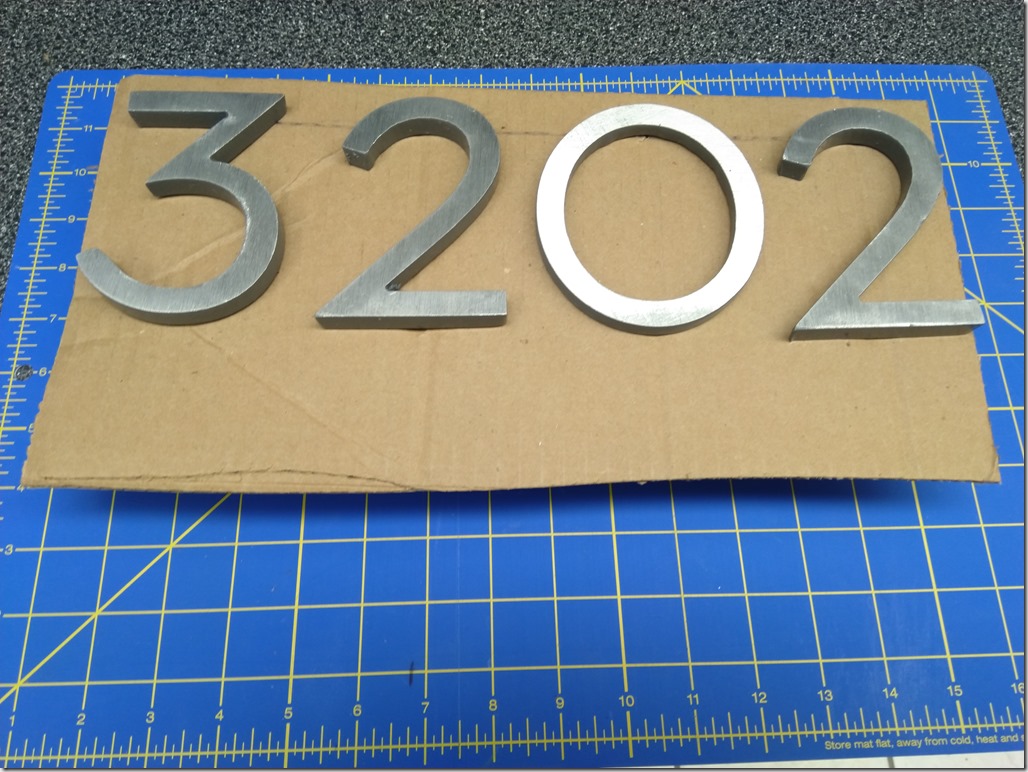 I even used a straight edge to ensure they were lined up. 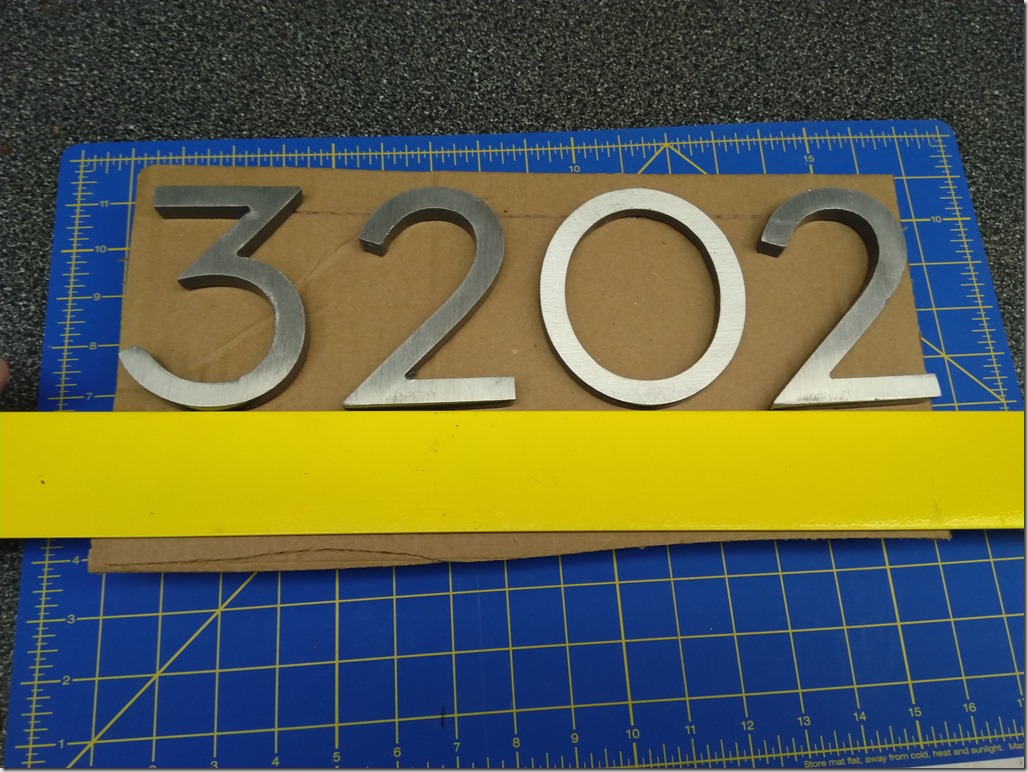 After a few adjustments, I had a template ready to go.  I taped it to the wall and drilled small pilot holes.  I did that because the masonry bit I had to use has no precision at all and I didn’t want the bit to slide and begin boring a hole off of my exact placement.

And despite my best efforts to accomplish that, that is exactly what happened.  And once you have multiple holes in the wall, there’s no adjustment you can make.  I actually didn’t see the end result until I had put in the last number.  And this is the end result: 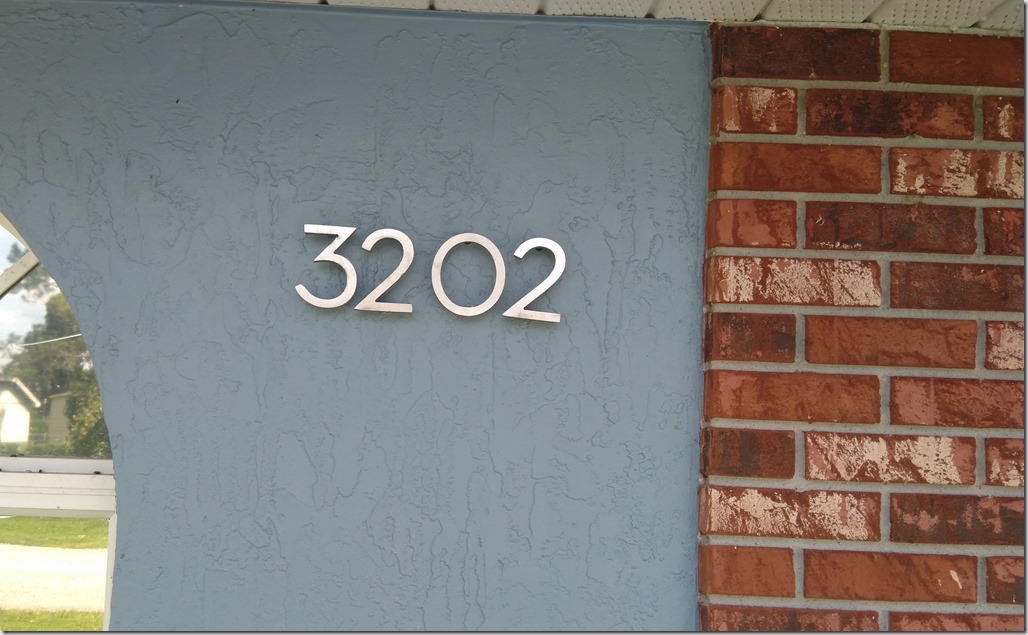 If that last 2’s lower post was only slightly more to the right, it would be perfect.  I’ll have to see if I can come up with a way to offset that post somehow.

In fact, now comparing the end result to the pictures of my template, there was a lot of variance in the placement of the first 2 as well.  I suppose maybe it will come down to pulling them all out, patching the holes, repainting the area, then repositioning them elsewhere.  To my credit, these numbers are only held in place with plastic anchors and no silicone sealant.  They are more than secure this way.

Not my finest work.

And now, one of the biggest expenses in my house fixup.  The pool was probably the biggest, but this one is right up there.  It’s the replacement of the roof.  I eventually settled on a quote for $9600 from the same contractor that has been doing my other work.

The roof was last replaced in 2005, right after the rash of hurricanes.  Things have changed in those 15 years.  I got dropped from one insurance carrier because of the age of my roof.  Not specifically because of the age, but because of the age and the fact the roof is 3-tab shingles.  No one uses 3-tag shingles anymore.  Everything is now Architectural shingles.

The workers showed up around 8 in the morning and immediately got to work.  I was not prepared for how loud the whole removal process would be.  Then rain was threatening in the area, but the foreman explained that as long as they got the moisture barrier in place, things would be fine.  There were some rotted panels and other wood that needed replaced.  Who would have figured?  I didn’t know.

There were storms around and when i went to lunch, there were showers just  little ways down the road.  In my area, that means nothing though.  When I got back from lunch, there hadn’t been any rain at the house and the foreman told me they were finishing up the “dry-in” barrier and after that, it didn’t matter if it rained or not.  The crew worked late, almost 12 hours, and they got quite a bit done.

The next morning they came back and finished up with more noise.

After it was all done, how was the result?  Well, most noticeably, the attic doesn’t pop anymore at night when it’s cooling down.  That must be a telling sign that there is less heat buildup.  I did climb up on the roof a couple days after and put my face near one of the new vents.  I could feel the hot attic air streaming out of it.  I gained two additional vents on my roof, so there must be some benefit to that as well.  The vents are a different design and they seem like they’re designed to not allow storm wind and rain to blow into the vent – important for hurricane country.

So, with the thicker tiles, the modern, improved barriers, the additional vents, and the light color tile, this must all be adding up to a much cooler house.  Time will tell if my electric bill goes down.  I recently changed the standard house temp from 72 to 75, so that will also help things.

This is the one last major item to be fixed to make the house reasonably marketable, should it come to that.