And that means, say goodbye to the old couch.  This couch has been here for, I don’t know, close to 15 years.  It was purchased at a contemporary furniture store that had a lot of eclectic stuff, with corresponding eclectic prices.  This couch met the needs of the time as far as style and budget and to be honest, has been pretty solid the whole time.  That’s not to say it’s been great.  The white vinyl stained and the chaise cushion continually slid out of place, leaving the back cushion to fall down.

The staining of the vinyl led to an experiment with painting the vinyl.  The initial appearance was really good, but the durability was absolutely terrible.  And with the couch now mostly painted, and looking in poor shape, it wasn’t eligible for donation.  I could do it, but not in good conscience.  So off to the dump.

How to get it to the dump?  Well, I have a station wagon, so let’s see if it will fit.  I took some rough measurements and the couch is almost an exact fit.  Lucky me.  However, I can’t get the two pieces of couch to interlock together so I can take them together.  So that means there’s going to be some destruction involved.

The first thing to do is to get the legs off.  Here you can see that I did not spray paint the non-visible parts of the couch, to save paint.  So no one would want to buy a couch like that, even from a thrift shop.  The legs, you can see, are removed and sitting on the coffee table.

Then it’s a matter of dragging the couch out to the garage to figure out how to take it apart.

The first thing I tried to do was take a sledgehammer to the back and sides.  I don’t really own a sledge, I just have a tiny hand sledge that I just use to pound things.  And so, pound I did, and nothing was really giving.  So it was time to do what the pros do – break out the Sawzall. 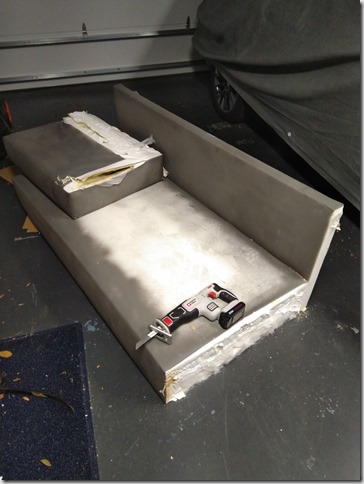 The Sawzall is one of those tools that is used in just about every DIY or home remodeling show.  I swear these people think it’s the greatest tool on earth.  I’m neutral on it.  I don’t have as much use for it, but I guess I should be glad to have one, because the few times I did use it, there wasn’t really any other alternative.

The first attempt at cutting was sort of lame and left me feeling stupid.  I didn’t think about the blade I was using and was using a course-tooth wood cutting blade.  I put the blade between two seams in the frame and started cutting.  It went smoothly for a while, then stopped.  I pushed through that and then realized, I had just cut through a screw.  I should be using a fine-tooth blade for metal cutting.  Duh.

A swap of blades and things went much smoother. Once I had that one piece separated, I had a better look at the construction of the couch.  It’s just a bunch of wood frames with vinyl streched over them, screwed together.  Gee, I could make one of these if I wanted.  But anyway, I saw the way the pieces were secured together and I thought it would just be better to find the screws and unscrew them instead of sawing through them.  So I did.

I used a utility knife and cut the fabric and vinyl to expose the frame, found the screws, which had been bent with a hammer to prevent any poking from happening, and removed them.  The back of the couch just slipped right off.

With the one half of the couch in three pieces, I could easy stack everything together into one bundle for transport. 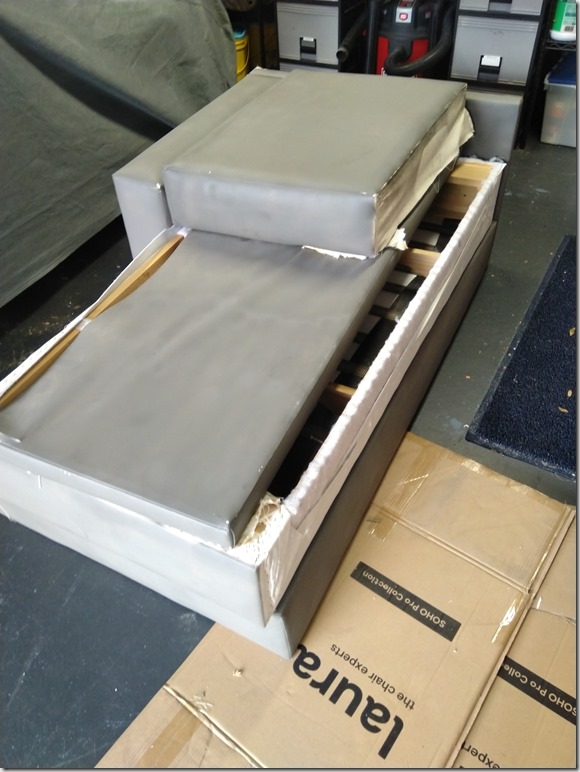 That’s all there is to the couch that took up all my living room.  Next weekend, it’s going to a landfill.  And I did get an answer to a question I had about the couch earlier,  It absolutely is a hand-made piece.  They used drywall screws throughout the construction.  Again, I could make one of these if I wanted to.