You would think that something like a electrical breaker box would be a pretty static thing in your house.  At best, some new breakers would be added as your electrical needs change and grow.  But somehow over the 30 years this house has been around, things have really moved around.  The list of breakers and their descriptors don’t all seem to align, and the descriptors themselves, well, some never made sense.  What is the “Nook”?

So today, in the freezing and consistently dropping temps, I decide I’m going to take the time to figure out what controls what in my breaker box.  Spoiler: there are still unknowns.

I’ve had this desire to do the mapping for a long time.  When I started, my plan was to buy 2 dozen night lights from Dollar Tree and plug them into every outlet, then monitor which ones went out as I flipped breakers off.  That was back when Dollar Tree had items for $1, so the cost of that plan has gone up since then.  And also, it was just excessive.  You can assume if one outlet in a room goes dead, the rest are also in line with that circuit.  So, in the end, I just made it work with a plug-in light and a live circuit tester for the hard-wired smoke detectors.

I began with the single breakers, which are supposed to control rooms, lights, or a single appliance.  I ended with the double breakers that controlled things like large appliances or the pool system.  I had most of the lights on in the house and I would flip off one breaker, walk around, and make notes about what outlets and lights were off.  I have a detailed Visio diagram of all the outlets, lights, switches, fans, etc in the house, so I just marked notes there.  I also made an excel file with the breaker positions and their existing descriptions, which I then updated.

When it was done, I had one single breaker that I have no idea where it goes, so I left it off until I figure that out.  I also have two double breakers that I’m unsure of.  One controls the pool pump, but it was getting too cold for me to continue, so I can test that on another, warmer day.  I’m not sure if there are two or three double breakers for my full HVAC system.  One breaker is labelled with a white sticker label “AC” and one is labelled “Heat”.  I don’t know if there is one specifically for the blower or not.  It’s too cold to experiment with that right now.

I found out the “nook” is the two outlets on the wall in what I consider the dining area.  I found out the entire west side of the house: the two guest bedrooms, the bathroom, and the hallway are all one one single breaker.  And I’m running two computers, my studio equipment, and my stereo all on that circuit.  10 amps?  Maybe 4 at the most, but still.  It’d nice if the rooms were on different circuits.

Also, the entire master bedroom and bathroom are on one circuit.  Also, there is one GFCI circuit that winds through the whole house, running the whole garage, bathroom outlets, and my office on the lanai.  I knew this was true, and I knew the problems with it.  The worst part about the configuration is that it’s all stopped by a GFCI outlet in the garage.  If it pops, everything dies.  I can probably improve on this and let each segment have its own GFCI protection, so if the outlet in the garage pops, the bathrooms and my office keep running.  If a freshly-installed GFCI outlet in my office pops, it doesn’t affect anything else downstream.  Ditto with the bathrooms.

So this is all in preparation for the upcoming solar installation, because as part of that, there is going to be a electrical panel reconfiguration, where a subpanel will be installed with a limited number of breakers that will remain powered by the battery.  I’ll need to choose which items I want to include in the new subpanel, and wouldn’t I look like a fool if I didn’t know what to include.

Curious how complex the house wiring is?  This is the diagram: 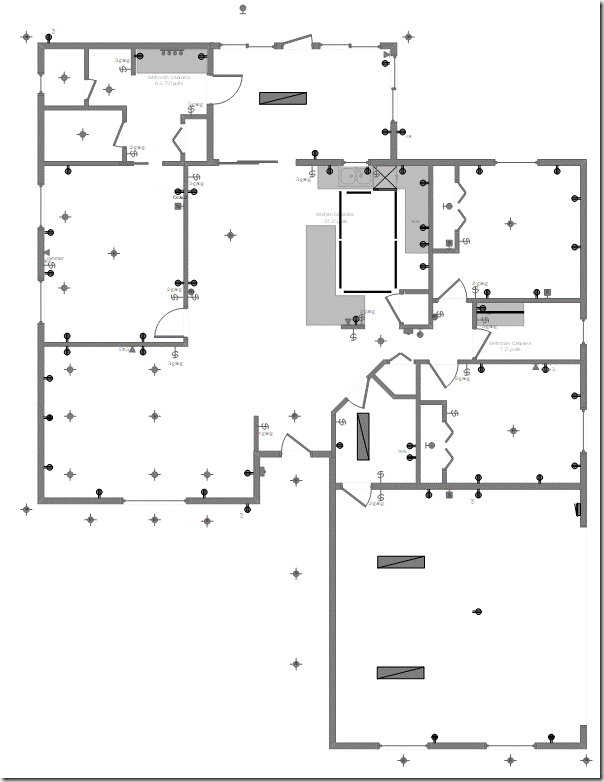