I mentioned a week ago that I had moved my office out into the guest bedroom because of some upcoming construction.  That construction is wrapping up and I would consider it a success.

When I first took over the house fully, I had a checklist item to repair the rotting window sill.  I purchased a wood repair kit and when I got into the project, I discovered the rot was significant.  So I cut out a large chunk of wood and replaced with an ill-fitting patch of wood.  That patch was in place for a long time.  Well, five years or so.  I had people come and look at the patch and ask if they could fix it.  Most said yes, but for one reason or another, it never happened.

Then, I asked the contractor who installed my flooring about the situation.  He suggested I get rid of all the wood and replace it with granite.  That was a totally different idea and I was impressed with his suggestion, as much for its durability aspect as its audacity.  This would involve tearing the room apart and rebuilding it.  So I asked him to quote me on the job.  He came out and got measurements and said he’d have something soon.  It never came.  Just like everyone else.

Over a year later, I really want to get this project done.  I call the big guys, some home contractors.  They say the job is too small for them and give me their contact for a handyman.  He comes out and discusses changing the wood out for some plastic wood that won’t rot.  He says he’ll look up some product and get back to me.  He doesn’t.  Story of my life.

In desperation, I contact the original flooring contractor and ask if he’s willing to take on the job again.  He agrees, comes out, and gives me a quote the next day.  His explanation for flaking out last time was that he didn’t really know how it could be done without replacing the windows.  It is likely they would be broken during the removal.  So, we agreed to quote the job with window replacement and if the windows were preserved, they would be reused and would lower the total cost.

Before demo starts, I have to go to a granite fabricator and choose the stone.  I choose a simple white, unpatterned stone.  I was told I could choose anything in a “Level 1” category, which is a pricing tier, and I think I got a Level 2 finish on a deal from the owner.  Good for me.

One chance to take pictures before this begins, to compare how it was. 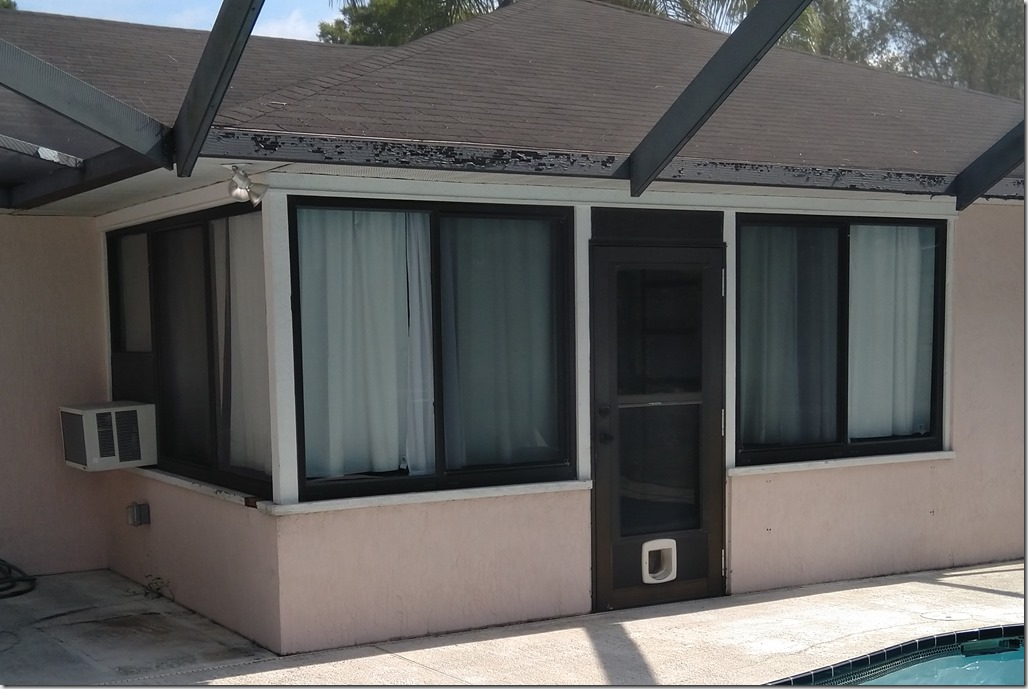 You can see the wood patch on the left side. 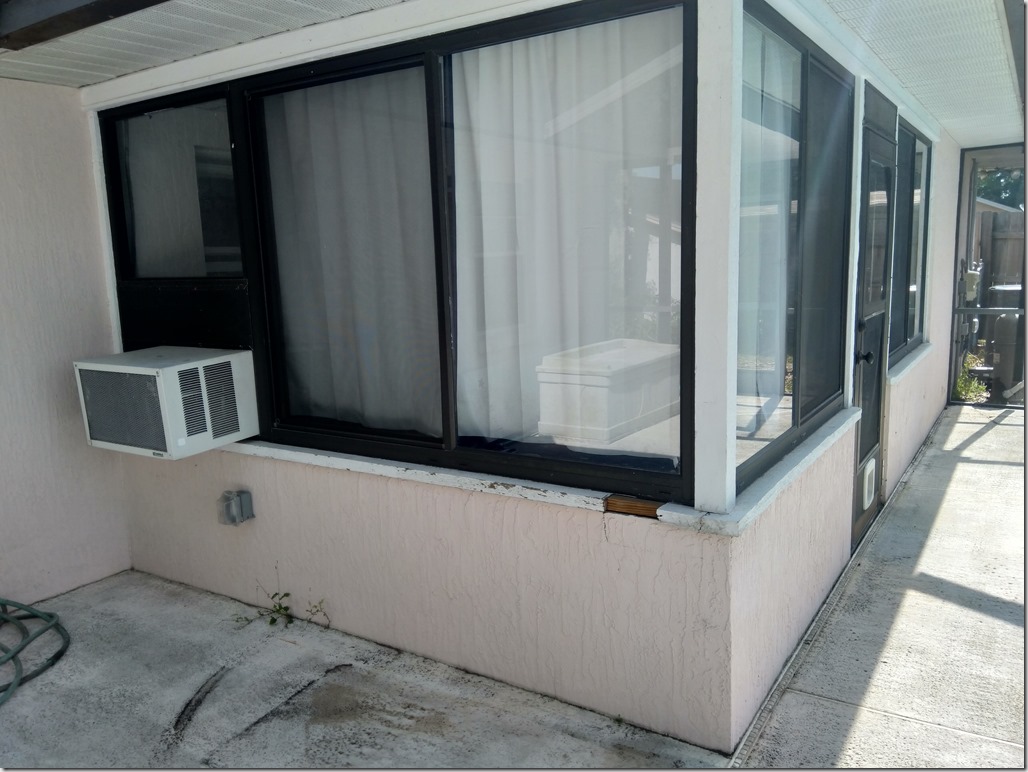 On day one, the room was demoed.  The windows were removed and the sills were removed from the walls.  Someone from the granite shop comes by shortly afterwards to take the measurements.  He explains that the notches for the door frame will be cut here on-site because transporting them with notches would be too fragile.  That’s fine.  Now we have to wait for the stone to be cut.  In the meantime, my lanai looks like some run down beach bar in the Bahamas. 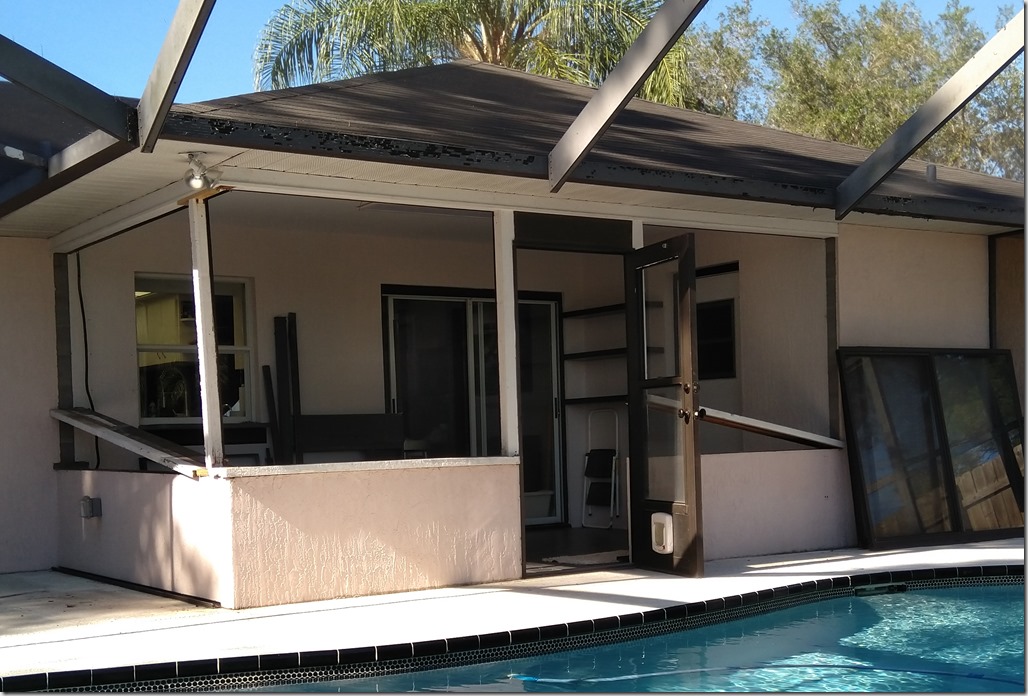 You can see just how bad the rot was. 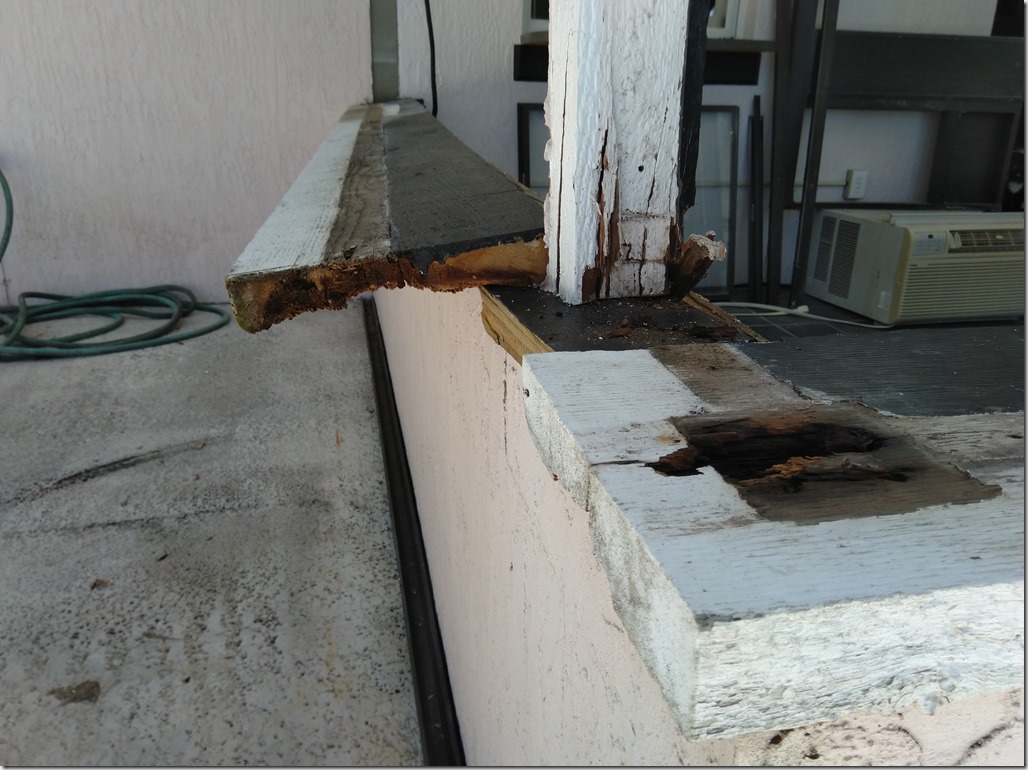 In a couple days, the granite is ready and once a storm clears out, everyone converges on my house.  Half a dozen granite workers and four contractor workers all measuring, cutting, fitting, levelling, and adhering the stone to the walls. And in the middle of it all, the pool guy shows up to add more chaos to the patio.  At the end of the day, the stone was set and one window was installed.. 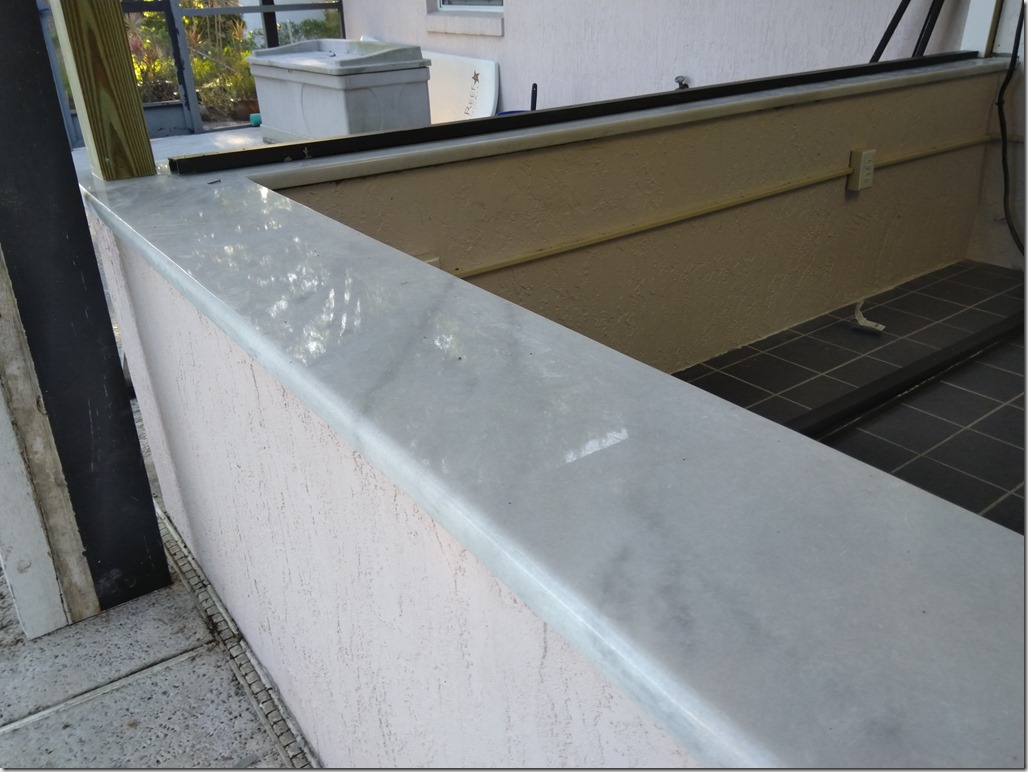 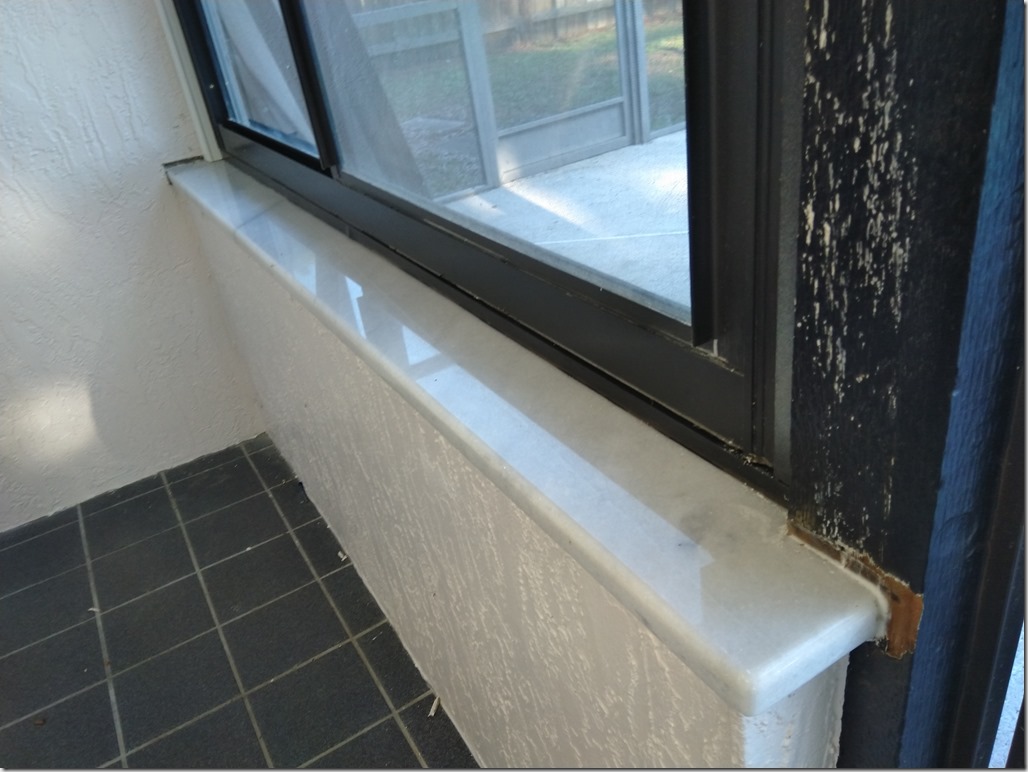 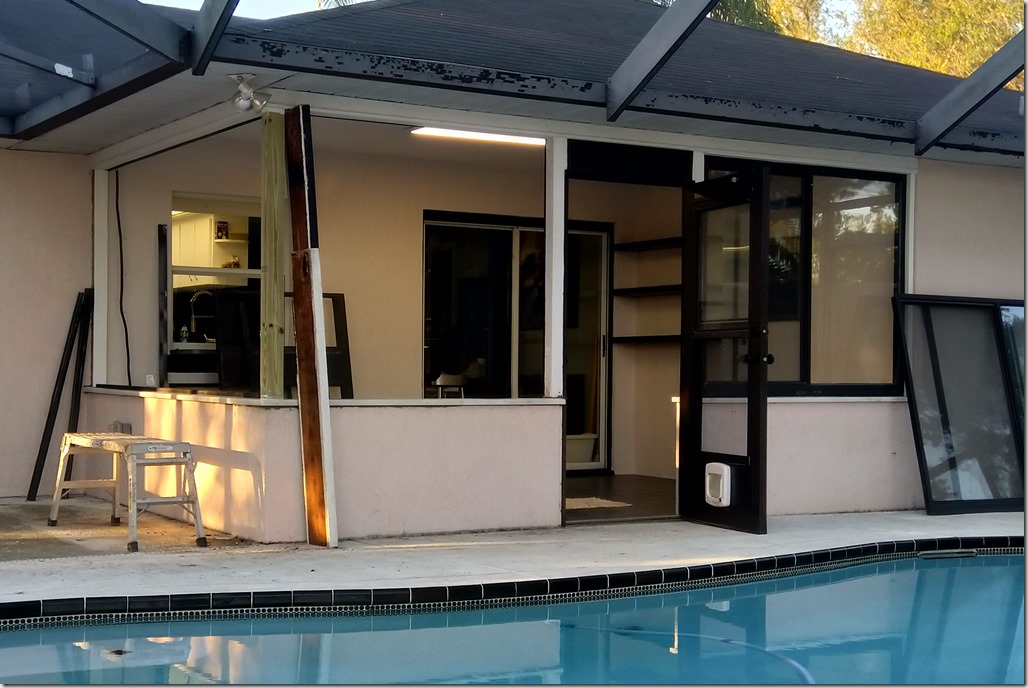 The next day, the rest of the windows were installed and caulking was done.  At this point it’s pretty much complete. 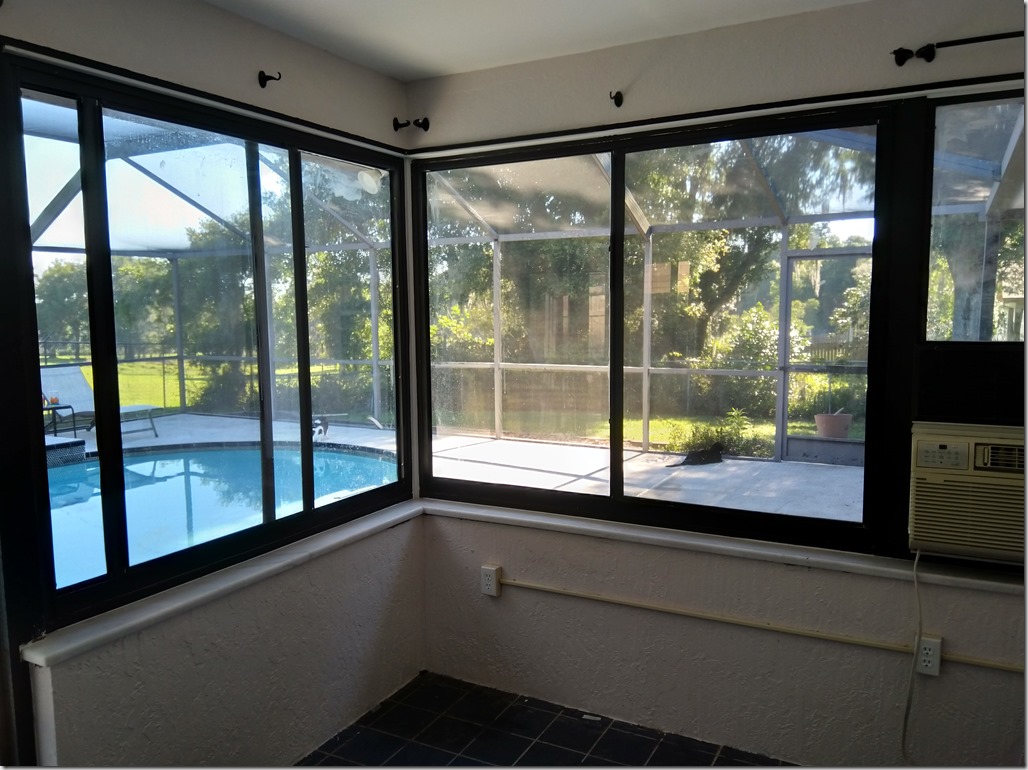 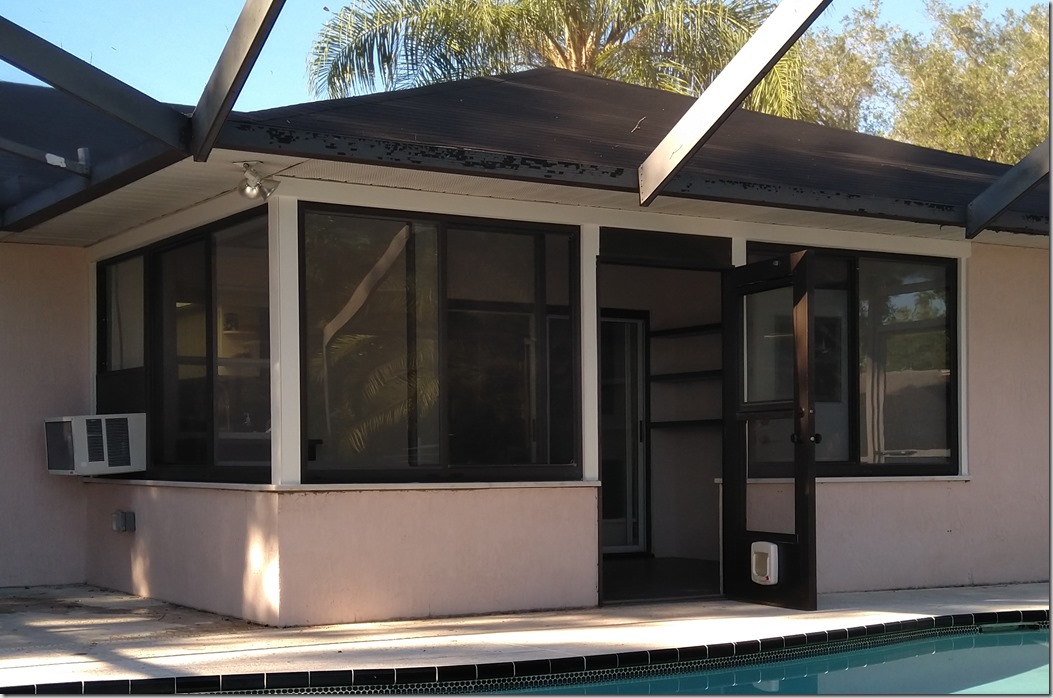 It looks pretty much exactly like it used to, but everything is new and durable.All lumber is pressure treated and faced with plastic wood.  The difference in height between the old wood and the granite was maybe 1/4″ and it was filled in at the top of the windows with plastic wood.  You can’t even tell it’s been filled. 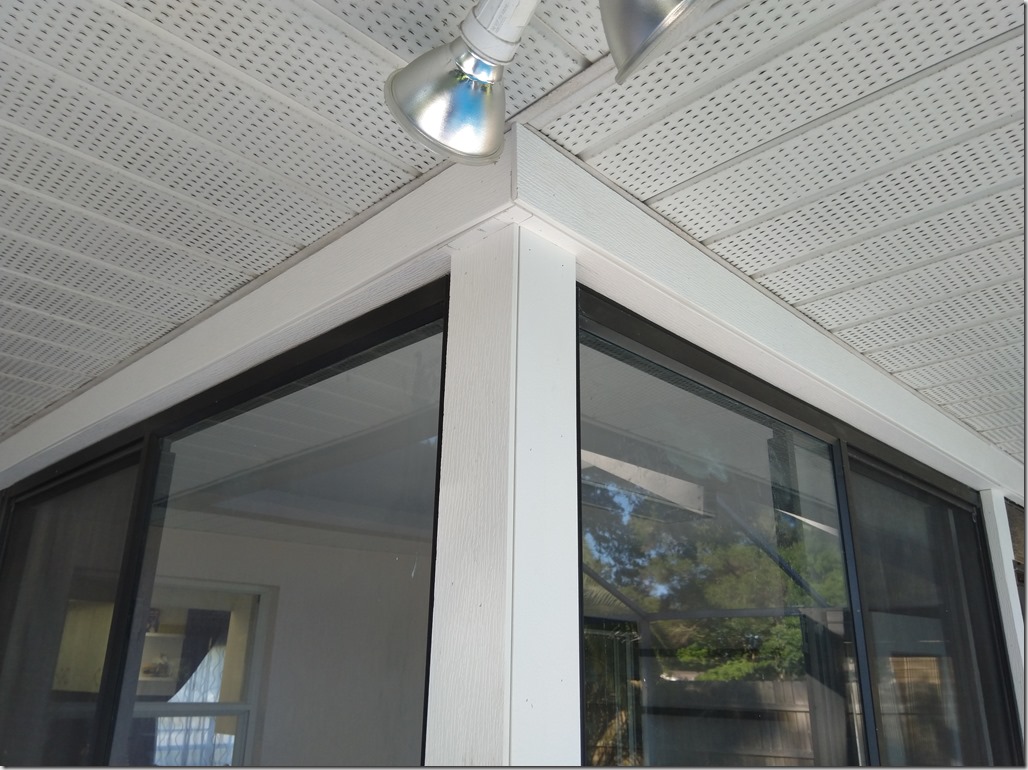 A great success.  Now that that’s done, what’s next on the list?  Next Tuesday is network wiring.  Then the next phase is repainting the house, then re-roofing.  I expect that will finish off my savings, but the phase after that will be retiling the bathrooms and resurfacing the pool patio and replacing the patio drain.

And after that?  The only thing I could think of left to do would be replace the kitchen countertops.  And replace the windows, but that one’s like 30k and I don’t think I’d realize any return on investment for that.