I’m going to start calling my motivation Cotton-eye Joe.  Where does it come from, where does it go?  I don’t have a clue, I don’t fucking know.  But anyway, when the painters were doing their pressure washing, they included the small patio off the pool deck.  That’s where all the pots were for my failed container garden.  In order to wash the patio, they had to move the pots and I felt really guilty about that.  I decided right then I would finish this job.

The main reason why the garden was never really completed was because the garden bed needed cleared out.  It was a mess of vines and weeds and there was a remnant stump from a tree I took out a while back.  I would regularly kill the weeds with roundup (and they always came back), but the stump I was having trouble with.  Every week or two, I would spend one physical expenditure trying to dig it out.  That was usually about 15-20 mins of effort.  Yesterday, I finally broke the tap root and got it pulled out.  The primary obstacle has been removed.  I then raked up the bed and laid down another coat of Roundup.  Time to move on this.

Next step is mulching.  I checked online for calculating how many bags of mulch you need and the formula made everything more complex than it needed to be.  In the end, I estimated about 150 sq ft of area to cover.  If each bag covers 2 cubic feet that’s uhhh… I’ll just buy a bunch of bags and if I don’t have enough, I’ll just buy more.  My suspicion is that mulch is like the opposite of spaghetti.  If you’re cooking spaghetti, you grab a bunch and cook it and end up with enough to feed an army.  On the other hand, you buy a bunch of mulch and it only covers a fraction of what you needed.

The garden project has been going on for well over a year.  One thing I have now that I didn’t have back then is a vehicle to haul stuff, like mulch.  With the new station wagon, I was now unstoppable.  I went to Lowes and bought 15 bags of mulch.  I wasn’t sure it would fit, but I could have easily fit 20 or more.  I got the bags home and unloaded the mulch.  I laid down two layers of weed barrier over most of the garden, only skipping the lower extension by a couple feet.  Then I poured out the mulch.  The 15 bags covered the area quite well.  Almost perfect. 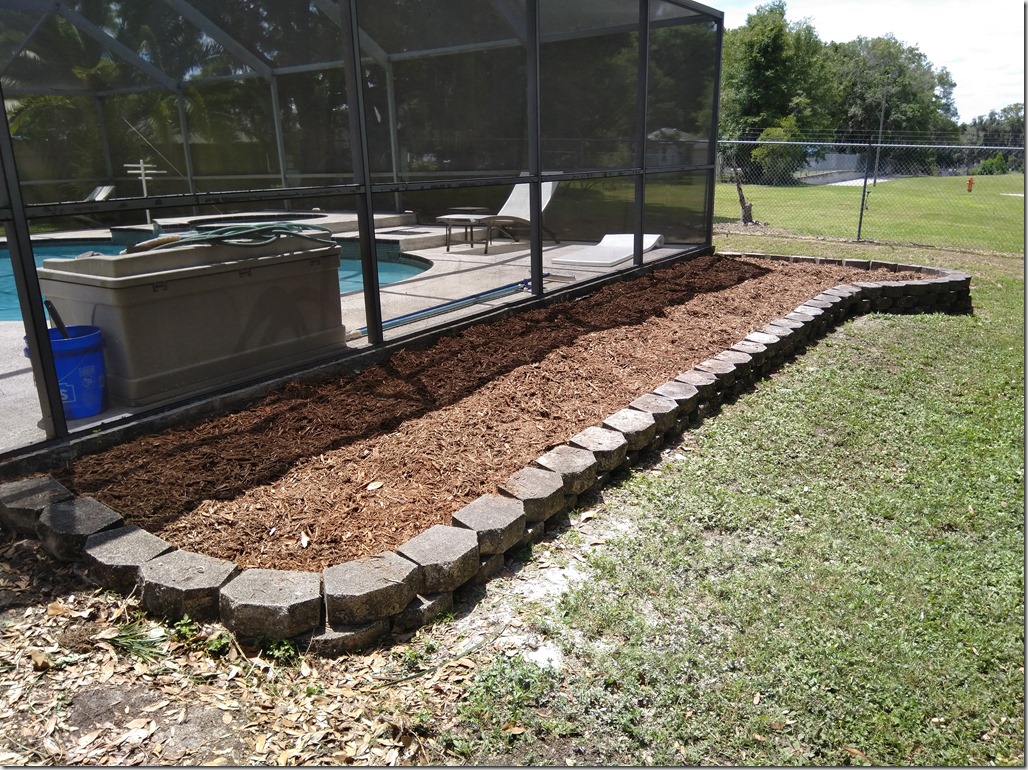 I guessed I could probably use a few more bags to thicken it up and fill in some weak areas, so I got 3 more bags after lunch and dropped them in, too.

Now, for the decorating.  Unfortunately, most everything I had purchased and planted in the previous Cotton-eye Joe moment had died, so I was left with only a few elements to place.  I’ll have to buy up some more plants now.  But, this is a start. 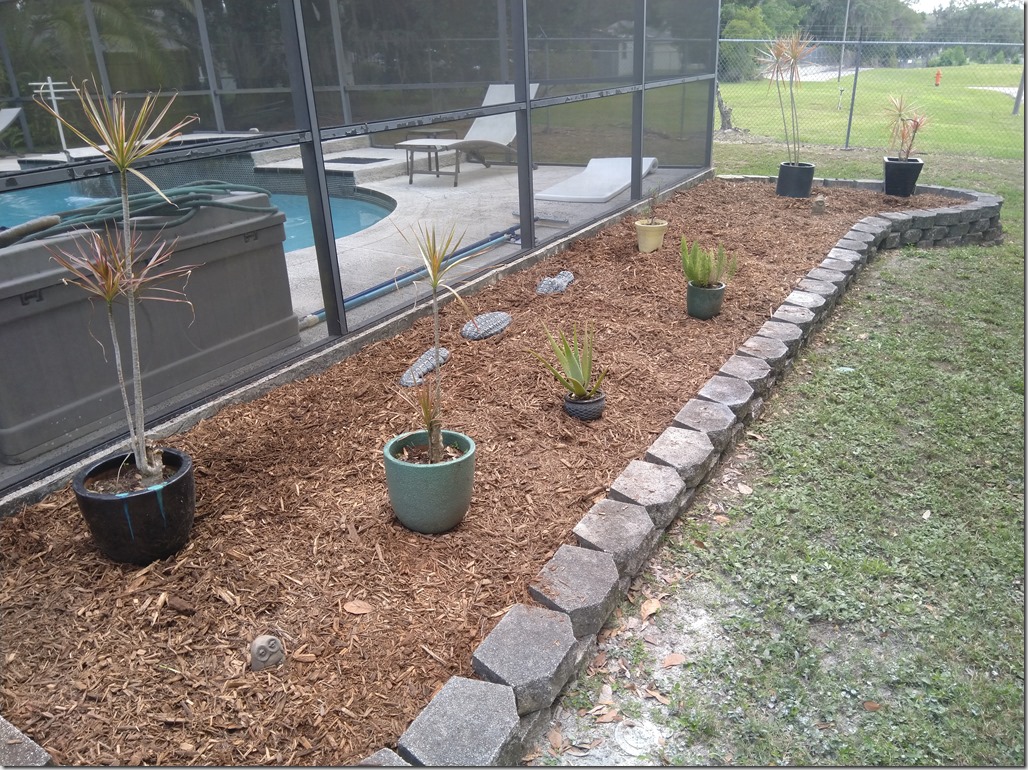 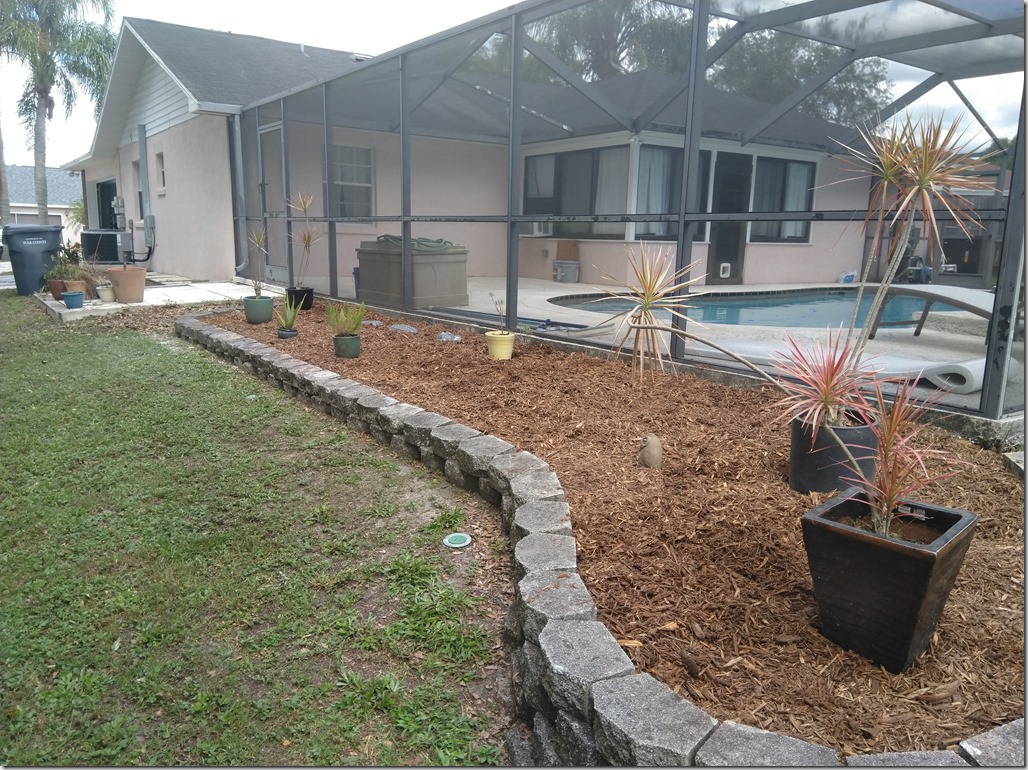 A couple of days later, I bought some more plants, some more expensive options.  I potted them up with some extra soil and filled in the garden bed. 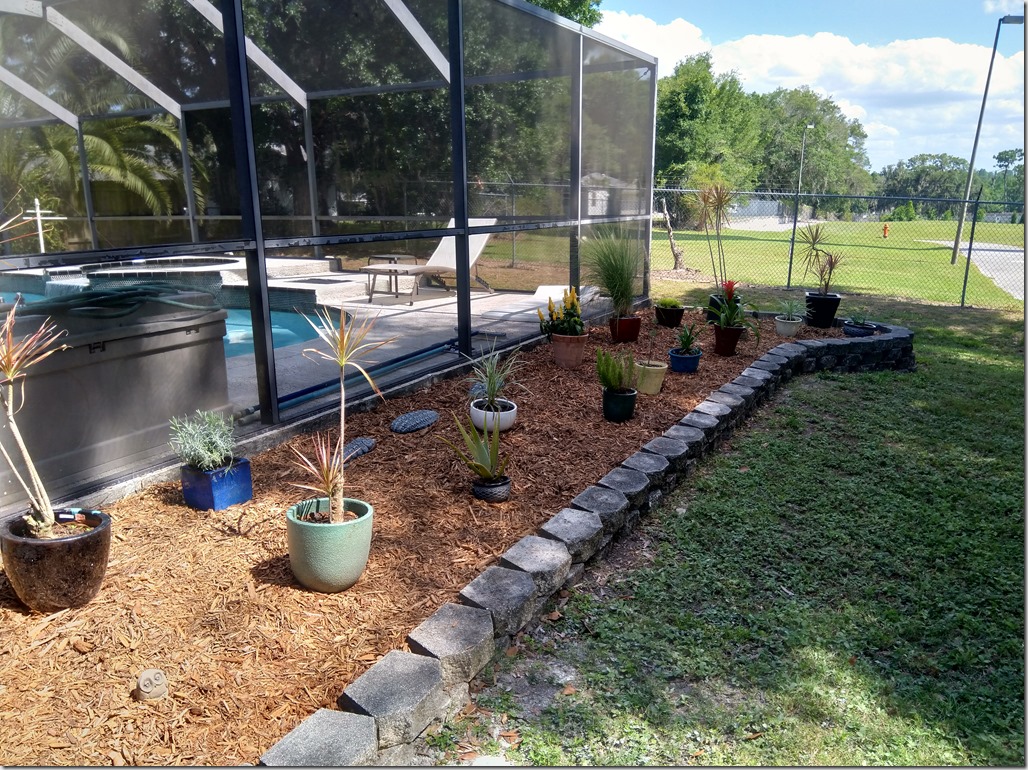 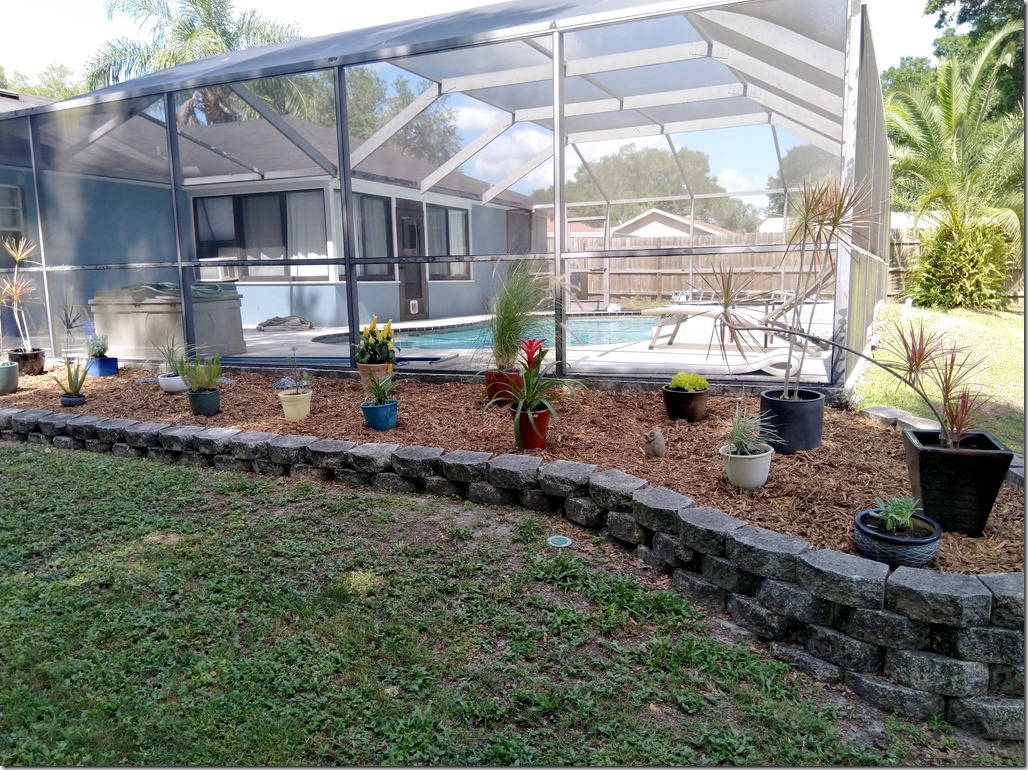 The pots have more color than the plants, but that’s ok.  There’s only a few flowers in the bunch, the majority are grasses.