This blog has been pretty quiet.  It doesn’t seem like there’s a lot I have been doing with the house.  I took on a small project today for something that was a small annoyance.

The guest bed, which used to be my primary bed for many years, is a simple Ikea frame.  At one point, the mattress was upgraded to a Tempurpedic and as part of that upgrade, the frame needed improvement.

Those memory foam mattresses don’t like to be on open slats.  There should be a solid platform for them to site on, or at least minimal space between the slats.  To solve that deficiency, I purchased additional slats from Ikea and doubled them up, making a solid base.  Problem solved.  Somewhat.

At some point, it began to be an issue where the slats would slide out of place and fall down.  At the time, this was resolved by placing a piece of old garden hose between the slats to hold them flush wit the outer frame and keep them from sliding.  Problem solved again.

At some even later point, the bed was disassembled and moved around and the center hose piece was discarded.  At the time, it wasn’t a big deal because there was a nice new bed to use (with its own problems, fixed and documented here)..  But sometimes, I will use use the guest bed for napping and once in a blue moon, someone else may use the bed.  And in these instances, slats will fall. 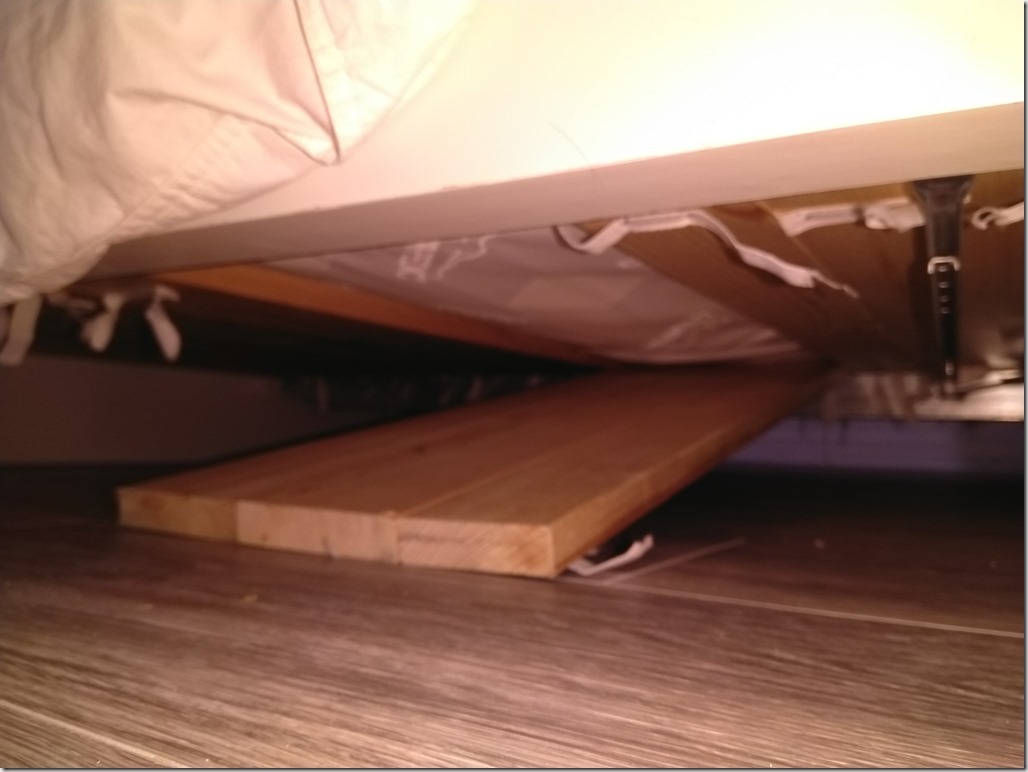 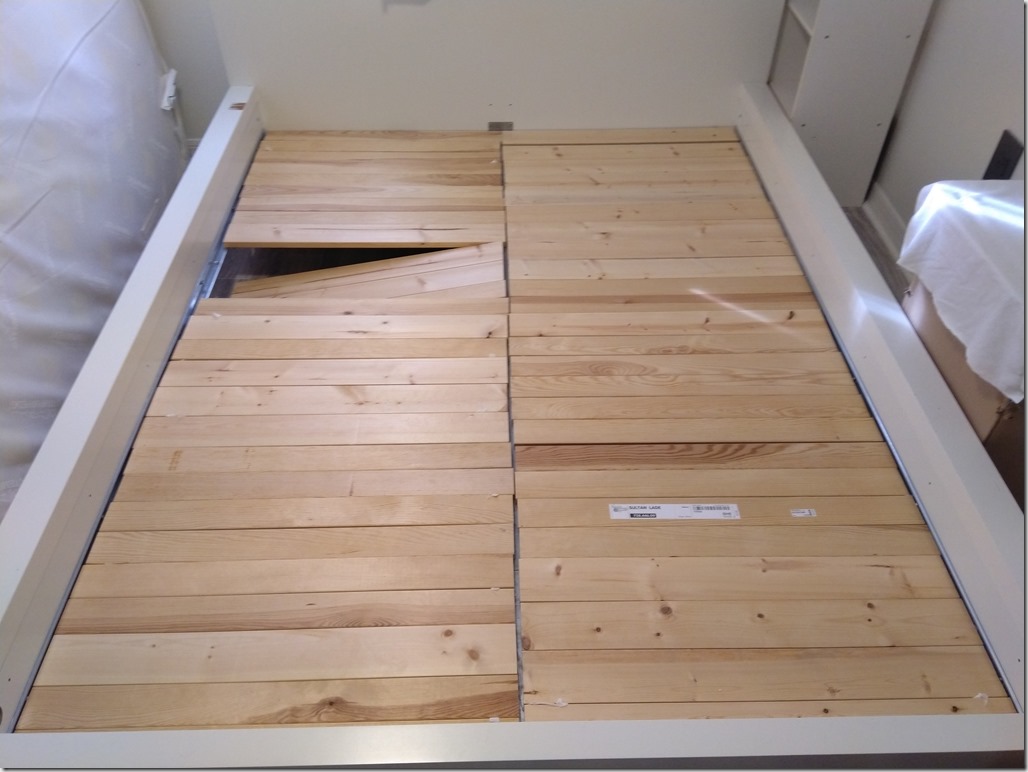 A few days ago, I set my mind to thinking about how I was going to fix the problem.  I didn’t have the hose anymore.  I didn’t want to buy a hose to replace it because that was a hack solution anyway.  The better solution would be to have a wood strip between the two slats to seal the gap.  But I didn’t have wood like that and the idea of me cutting a long thin strip of wood was sure to end in disappointment, especially when the gaps between the slats weren’t uniform. 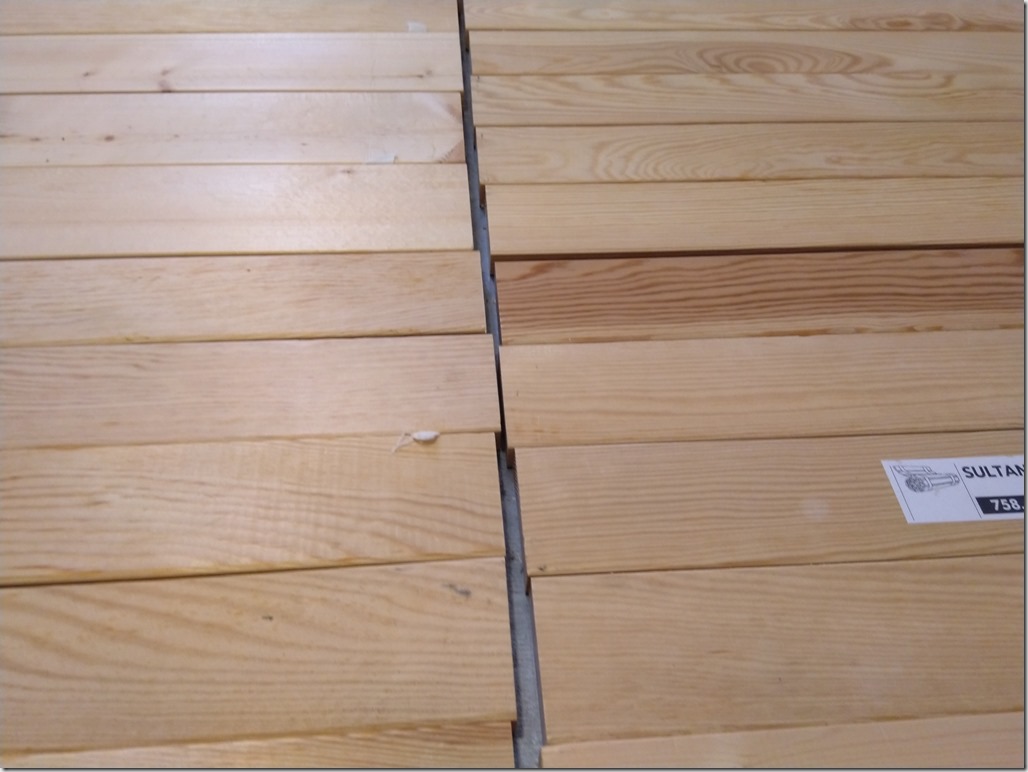 As I was disassembling the bed, I found I had two different versions of slats, each with different widths.  Additionally, I found some of the frame rail screws had worked a bit loose.  So I tightened up all the screws and put all the slats of one type on one side. 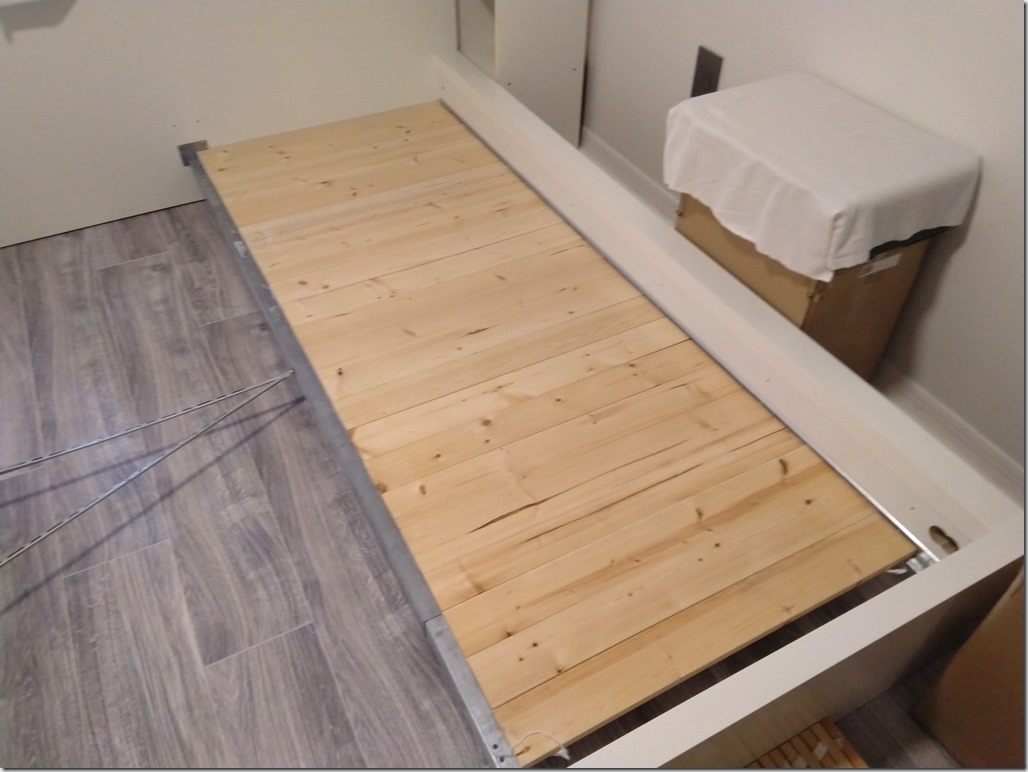 Then, my solution was to “extend” the other slats to fill in the gap between them and the other side.  The method I chose for this extension was: screws.  Cheap drywall screws, of which I had plenty sitting around.  I bundled up a bunch of slats, got some screws and a power driver and drove one screw in the the end of each slat. 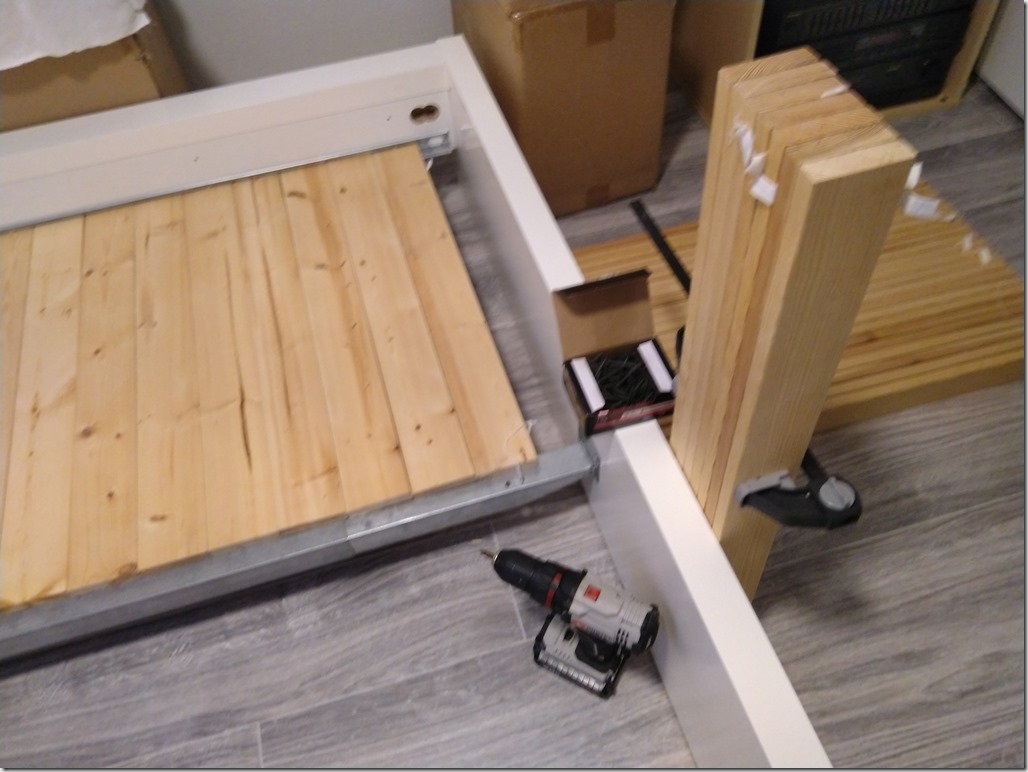 The screws effectively lengthened the slats by an adjustable amount. 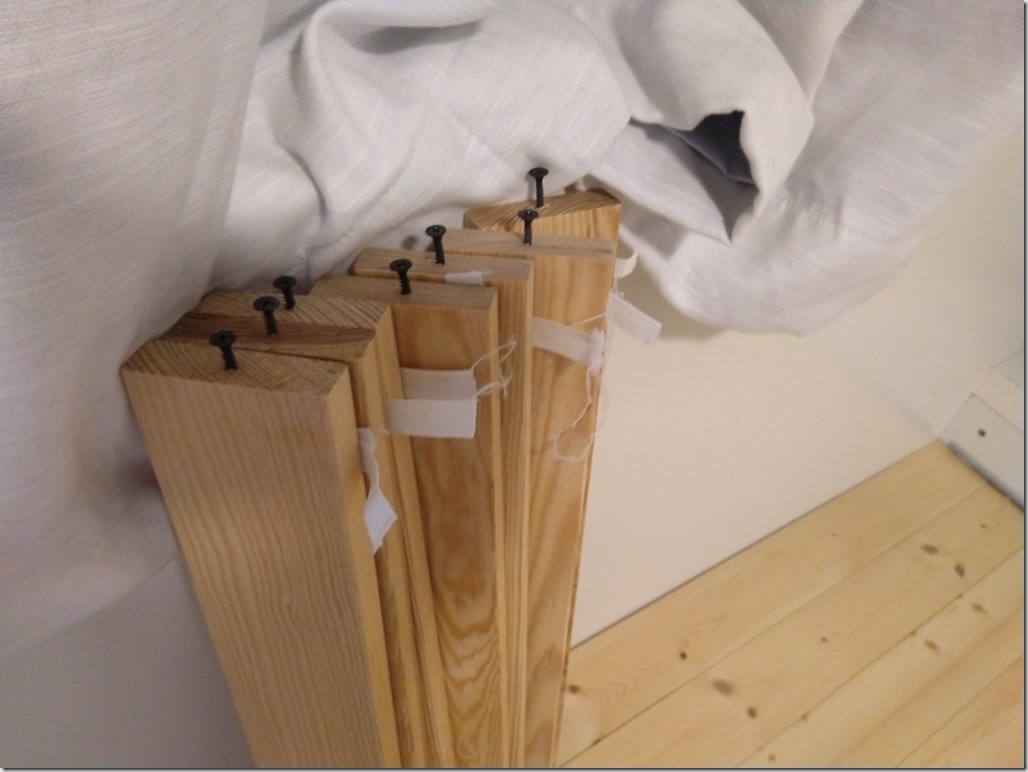 Further, each screw could be individually adjusted to compensate for any difference in gap width, which was caused when a frame screw jutted out too far from the rail. 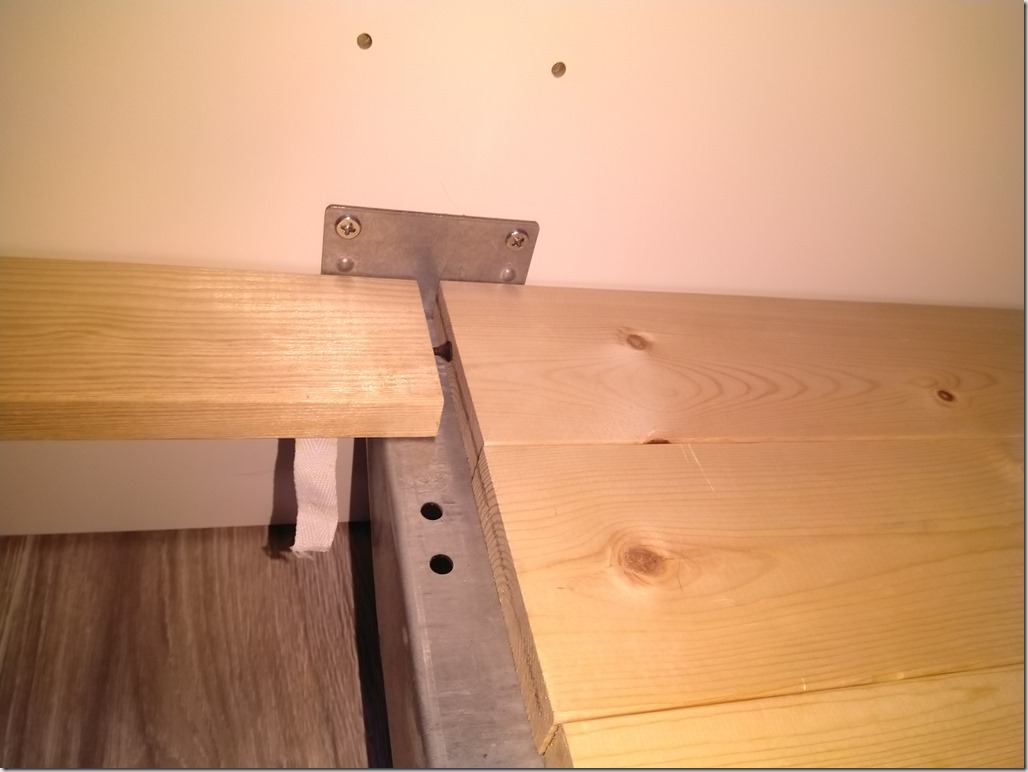 You can see the slight difference between some of the slats.  There was also a difference towards the center.  Apparently, the frame is bowing out wider in the middle from age and use. 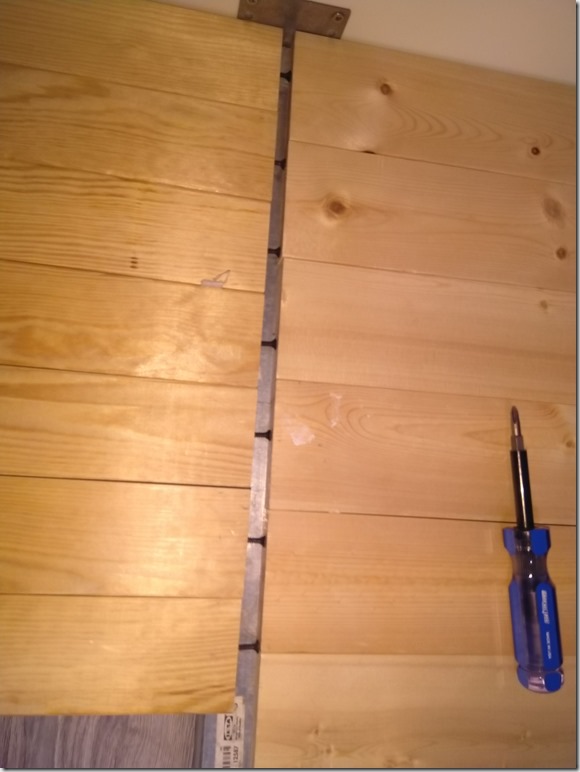 With all the slats in and adjusted to prevent any horizontal sliding, the bed is once again rock solid and all set for a nap.  Which is exactly what I did right away. 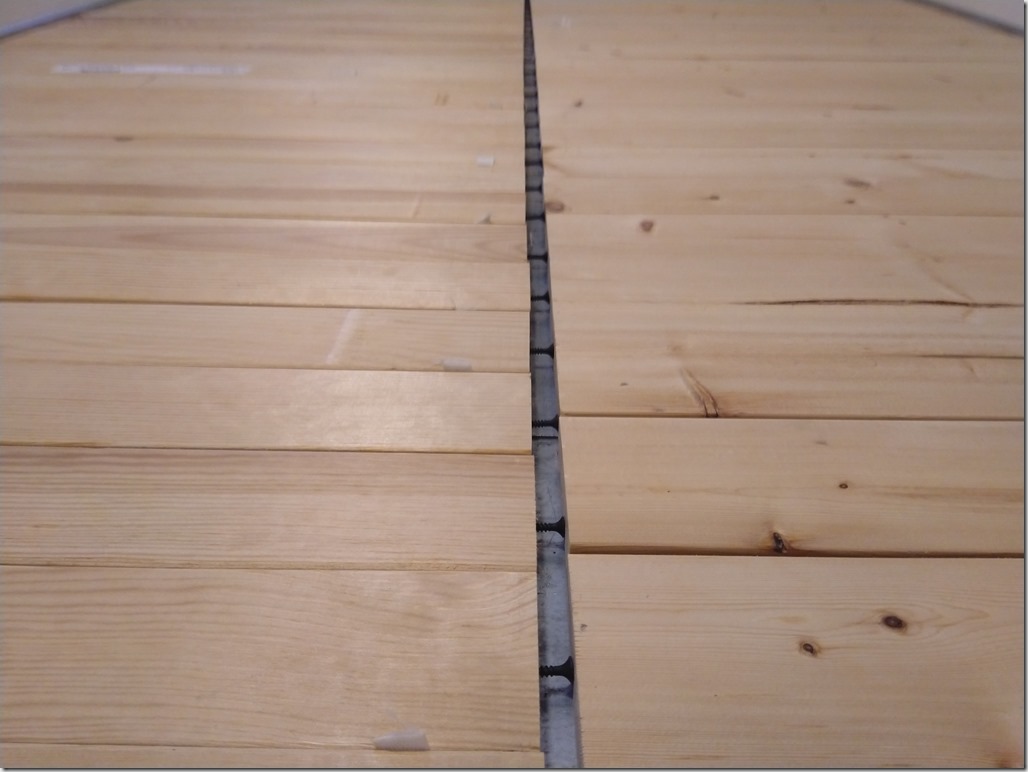