This weekend, all the tools have arrived and it’s time to go.  The fiberglass poles were broken out and I taped the endoscope to the tip and stuffed it up the wall.  To my surprise, at the top, I can see there are multiple holes available for running wires.  With some jostling, I am pretty sure I found myself looking into the attic.  Well, that was fucking easy.

I left the pole and camera in place and climbed into the attic.  Ok, this is not as fucking easy.  I could not see the pole sticking up from below, so that wasn’t promising.  I gave a quick inspection as to where I would need to go and it was not a cool trip.  Before I headed in blindly, I wanted to know how far I would have to go in, so I made a mental note of where the AC duct was and then I would find out where in relation to that duct the outlet was.

When I went back down, I found the AC duct was right in line with the outlet.  So that was an excellent marker for finding the pole.  As long as I was going up again, I figured I’d try snagging the pole.  I tied some pull cord to the head of the pole and shot it back up the wall and into the attic.

I headed back up and took with me a flat board to lay across the rafters so I could lie flat and worm my way forward, and I took a few sections of pole with a hook attachment on it to catch the pull cord and drag it to me.

Crawling on my stomach across beams was not a lot of fun.  When I made it near the AC duct marking my place, I was a little crestfallen.  There was mounds of insulation blocking any view down to the edge of the house.  You couldn’t see the pole, you couldn’t see anything.

I tried using the pole I brought up to spread the insulation around and clear a path, but the pole was too flexible.  While up there, I wracked my brain trying to think of what I could use to clear away that insulation.  I just didn’t have a pole long enough to get down there (and not flex like a noodle).

I came back down and stopped for the day to analyze the situation.  After some thought, I came up with a few ideas.  Fist, I could try the magnetic pole tip and try to catch a metal ring tied to the pull cord.  I might be able to do that without seeing anything.  Next, I could join all of my kayak paddle poles together and that might be long enough to reach down there and move the insulation out of the way.  A combination of the two ideas would be to put the Magnapull bullet on the end of the kayak poles to grab the ring, since it’s a much stronger magnet.  Finally, if I can clear the insulation enough, I could try dropping a chain with a pull cord down through the top, since I know there are holes available.  So, plenty of options available to me.  But this has to be done early in the morning before the sun comes up and turns the attic into an oven.  So, tomorrow…

So while waiting for the next day, I figured I could investigate the locations for two more runs.  Both are on the east wall of the house, with a plant shelf high up.  My plan was to see if there is a gap between the back wall of the shelf and the block exterior.

I hammered out the outlet box that had an existing coax cable in it and was immediately confused.  I was in the cinder block.  I began what I expected to do.  I start fishing the rod and camera up the wall between the drywall and block.  The realization came to me slowly.  The first clue was when I checked the routing of the coax cable.  It didn’t go straight up.  It went off to the left.

I took a step back and looked at the wall. 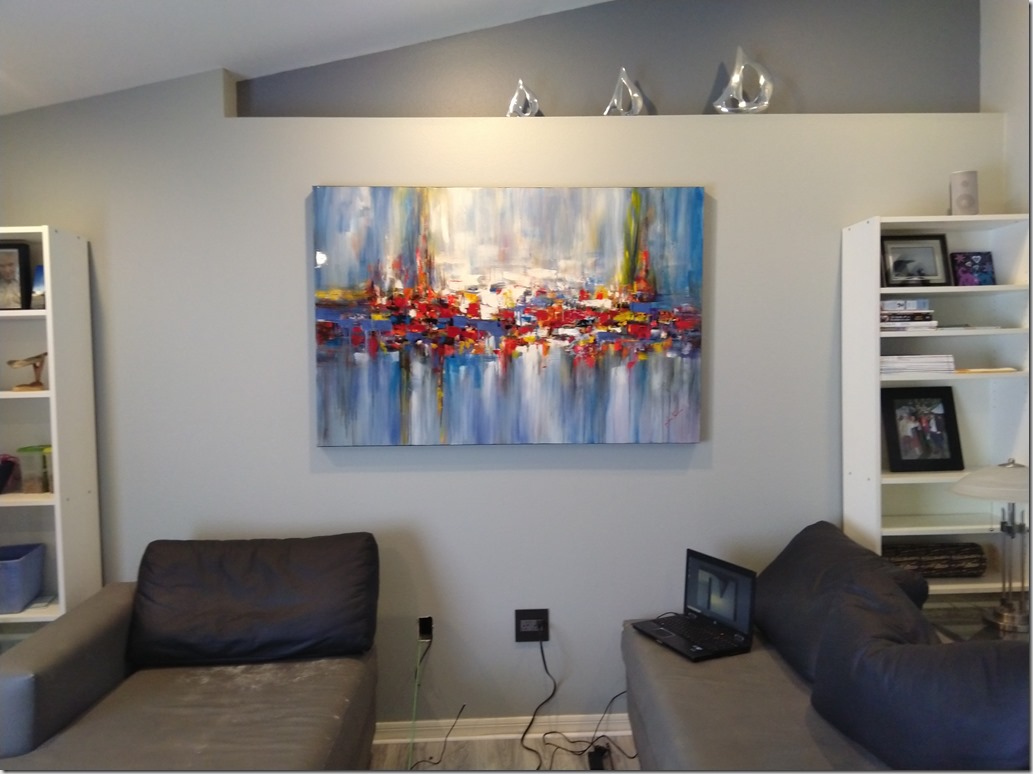 It’s not that the shelf extends out from the block wall.  The shelf is the block wall – the top of it.  There is no way to go behind the shelf because the back wall of the shelf is literally outside the house.  Well, that explains the coax cable that ran into the outlet box from outside the block.  Prior to painting the house, I pulled that cable out and patched up the hole.

While this information is sort of a deal-breaker for running that cable, it comes at a very important time.  One item on my short list is to install a weather station on the house.  One of the plans I was considering was mounting a pole on that side of the house.  Had I gone ahead with that plan, I would have drilled lag bolts right into that area and they might have penetrated right into the interior of the living room or bedroom in the shelf area.

Ok, so two runs are completely off the list.  There’s no way I can navigate around the plant shelf.  That leaves two runs I can attempt.  The first continues tomorrow.